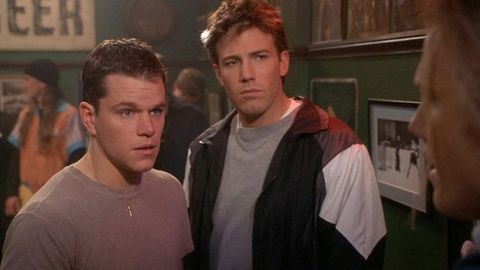 Ben Affleck was really all inside Will Hunting – Rebel genius but it took years to understand, years to understand that he is a great man of cinema, an acute person with a marked sensitivity for images and for the story, an actor who understands the characters very well but also a man who is not easy, full of contradictions. It took years also because of him, his and the Hollywood system that grinds, crushes and conforms everything and everyone to predefined models, so that the public is always faced with something predictable. And looking at a big jaw-dropping guy, the most predictable thing is that he’s a sexy action hero.

He was actually on television for 9 years, a thousand extras, even one in Buffy the Vampire Slayer and then the independent cinema of Linklater and Kevin Smith. The movie to watch of this stage is Life is a Dream, in which he has a small role, but he was that type of person and actor there, the one who at one point writes a small film with a friend (Will Hunting precisely) and finding an established director Gus Van Sant makes the hit (Oscar for best screenplay).

From there everything changes, he becomes known together with his friend Matt Damon (but between the two the real screenwriter is he, we will understand it years later). Immediately it becomes interesting for blockbusters, Michael Bay sculpts it, changes it and adjusts it to the needs of Hollywood before for Armageddon and then for Pearl Harbor. He literally fixes it: he puts his teeth back in place, sends him to the gym, covers his body with oil and films him like sex symbols are filmed. And in fact it becomes. Between 1998 and 2006 he made some of the silliest films possible chasing blockbuster success as an action hottie. The film of this stage to see is Criminal trap, beautiful film by John Frankenheimer, even if it is an exception to really understand it you have to go down, down and see Lilies, translated by us with Extreme love with Jennifer Lopez (with whom he was dating at the time) or Dare devil with Jennifer Garner (who will become his wife and with whom he will have three children), the worst of a long list. Yet he has the eye and the head. He is much smarter and sharper than the films he makes, in 2004 he is the California state champion of Poker and thus qualifies for the World Poker Tour. To say the least. But Hollywood wants him big and stupid, and when he doesn’t get the kind of gigantic success that blockbusters claim, Tom Cruise’s success, he’s lucid enough to understand that he has to change.

It is the best moment in a story of rebirth at the expense of a recently beautiful image that has taken root immediately and well in public opinion. And the heart of it all is right Extreme love. That film is a massacre, more than any other bad film that made that sentimental comedy becomes a point of reference, it is made fun of and he pilloried. Jennifer Lopez with that film also closes the rising part of her acting career, but for Ben Affleck it is an awareness. The massacre puts him at the lowest point of a career as a handsome never gone where he seemed directed and forces him to return to more serious films (three years later in 2006 he won the Coppa Volpi in Venice with Hollywoodland and to everyone it seems a mistake) then to write and groped to direct films. In fact it forces him to return to a cinema man as he had started. Gone Baby Gone, is the film of this phase to watch, his debut with his brother Casey as the protagonist, incredible if you think that it is a debut. A story of missing children and a pair of detectives in overalls, dry, shot with exemplary essentiality and very serious, it seems to be the film of a seasoned master. A revelation. The next film, The Town is the cinema of robbery with the head, the third, Argon won the 2012 Oscars.

It is the total overturning of Affleck’s career, even if it would then be a direct continuation of how it really began, when he no longer pursues giant success, he makes films with Terrence Malick and instead chooses the more commercial ones (who never refuse when they arrive). So he even ends up being cast as Batman (and he’s a perfect Bruce Wayne, possibly the best ever seen on screen) for the series of films supervised and directed by Zack Snyder. He who in the mid-90s when those roles chased them had to be Superman in the unrealized version that Kevin Smith had imagined (and again it would have been perfect). The must-see film of this phase of rebirth and re-emergence is Gone Girl – Liar love that holds everything by itself.

Except that Affleck’s career seems to be doomed to untapped potential and as soon as something goes well demons reappear, relationship problems with women (the list is incredible and boasts crazy names and bodies) and above all alcohol, a problem. not a little. When everything went wrong, in 2001, he ended up in rehab, he was only 30 years old. And then again the demons of alcohol have returned more recently ruining this phase of ascent. His fourth film (The law of the night) is terrible and the alcohol prevents him from directing the new Batman movie (it would have been a consecration if he had shot it at his best) forcing him to the umpteenth restart. Rehab again, this time at almost 50, and again the movies like His last wish plus a thick and swollen physique that betrays his state.

Now he is in a positive moment again, he is back with Jennifer Lopez (after being with Ana de Armas) and the film to see of this last phase is definitely Go back to winning, in which his body is still ravaged by too much alcohol, but he’s perfect because he uses it for an exceptional story that feels like his own, even though he plays a former basketball champion who recycles himself as a coach. Very beautifull. He will be Batman again in The Flash, but for the last time, and in the meantime he starts giving his best again. Who saw Last Duel by Ridley Scott (not many, objectively) noted that he’s back in shape, alongside lifelong friend Matt Damon (they just grew up together, one block away), his dyed hair character is the best in the world. film, the most vital. And then now with a co-star role in Tender Bar by George Clooney (on Prime Video) holds up pretty much the entire film by himself (and he’s lost weight!). In addition there are a couple of films to direct and interpret that if they start and are able to do they can promise well, one is a war film written by Nic Pizzolatto (that of True Detective), the other is the remake of the classic (and beautiful) Witness for the prosecution. Provided that he can make it.