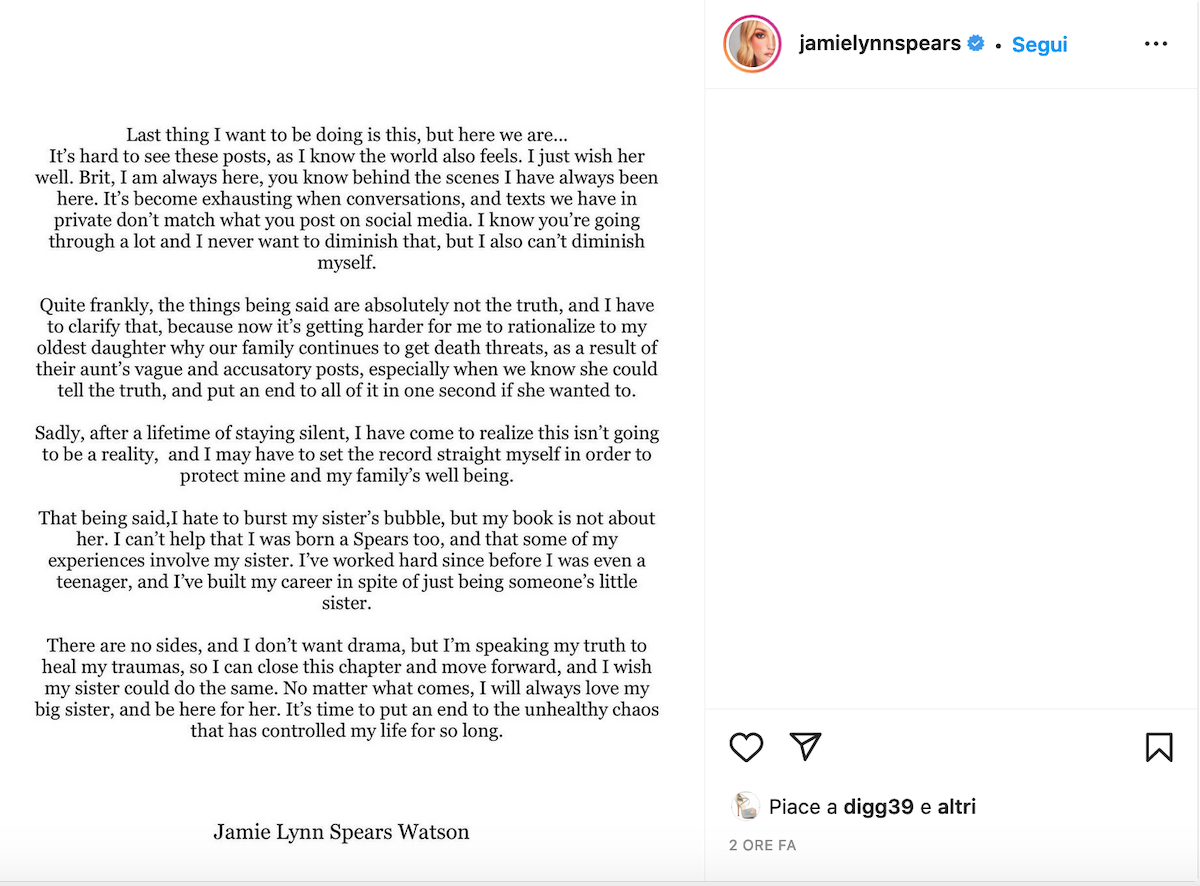 Two days ago Jamie Lynn Spears, Britney’s younger sister, appeared on TV, a Good Morning America, to promote Things I Should Have Said. In the book, the woman describes the pop star’s increasingly strange and bizarre behavior before the conservatorship. On TV she said, drying her tears, that she always loved her sister and tried to protect her.

Britney Spears’ reaction came last night through a long text attached to a tweet in which she says she saw the broadcast with a fever of 40 ° C (and the bodyguard who did not want to go get her medicine).

«Fortunately» writes the pop star «I had a high fever and therefore I didn’t give a shit. But there are things that bothered me. The first is when my sister says I was out of control. But at that time, about 15 years ago, she wasn’t there. So why does he speak, if not why does he have to sell a book at my expense? ‘

«My family» writes Britney again «have ruined my dreams a thousand percent and now they are trying to make me look crazy. My family likes to hurt me. They disgust me. “

Jamie Lynn Spears replied on Instagram: “The last thing I want to do is write these words, but here we are… It’s hard to read those posts, I know it’s like that for everyone. I wish you the best. Brit, I’m always here for you and you know I’ve always been out of the spotlight. It’s exhausting when the things you write on social media don’t match what you write to me in private. I know what you’re going through and I don’t want to belittle it, but I don’t want to belittle myself either. ‘

“Frankly,” continues Jamie Lynn, “the things that have been said are not true and I need to clarify them because it is increasingly difficult to rationally explain to my older sister why my family continues to receive death threats due to the vague and accusatory posts. her aunt, especially as she could tell the truth and put an end to it. ‘

Jamie Lynn Spears goes on to say that she had to expose herself to protect her family and that “I hate blowing my sister’s bubble, but my book is not about her” and that “I’ve been working since I was adelescente to make a career out of it. is considered only someone else’s younger sister. “

Conclusion: «I tell the truth to put the dramas behind me, close a chapter and move on. I hope my sister also wants to do the same. Whatever happens, I will always love her and I will be there for her. It’s time to put an end to the unhealthy chaos that has dominated my life for too long. ‘