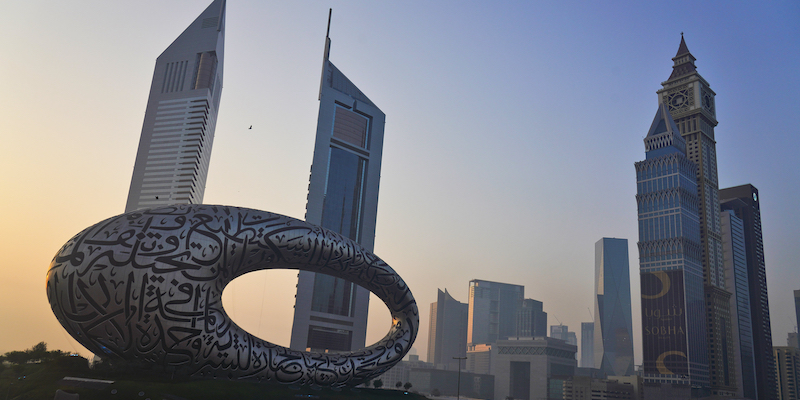 Fifty years ago what we now call the United Arab Emirates was formed, which on December 2, 1971 declared its independence from the United Kingdom, and put an end to a long colonial domination. Resulting from the union of seven emirates, the United Arab Emirates have a history of pirates, trade and foreign domination. Today they are a world power: their cities, such as Abu Dhabi and Dubai, are considered an architectural marvel, but their role in the world is often considered controversial.

In recent decades, the UAE has made enormous progress economically, like various other oil exporting countries in the region: it has become a very important center for global finance, a major tourist destination and has gained prestige. and international influence. On the other hand, I am an authoritarian country involved in many crises in the Middle East, which on more than one occasion has hindered attempts at democratic transition and supported friendly authoritarian regimes.

The United Arab Emirates is a federation of seven emirates – Ajman, Fujaira, Ras al-Khaima, Sharjah, Umm al-Qaywayni and the two most important, Abu Dhabi and Dubai – which lie between Saudi Arabia and Oman, in the Arabian Peninsula. In all, they are just over a quarter of the size of Italy and are the 14th country in the world for per capita GDP (Italy is 44th).

The fiftieth anniversary has become an occasion for the government to propagate the successes of this small, rich and powerful federation. For the fifty years of the United Arab Emirates, the government has created a special site which, among other things, contains a video entitled “Letters to the future”, which celebrates the country’s progress.

– Read also: What is the United Arab Emirates

The UAE is organized into a federal system of absolute and hereditary monarchies. The maximum authority is the Supreme Council of Sovereigns, formed by the seven emirs, but each emirate has its own government with good political and economic autonomy. Conventionally, the Emir of Abu Dhabi is the president of the United Arab Emirates – now he is Khalifa bin Zayed Al Nahyan – and the Emir of Dubai is the prime minister, a position currently held by Mohammed bin Rashid al Maktoum (the one accused of kidnapping his daughter).

Then there is a National Federal Council, a kind of Parliament, made up of 40 members, 20 directly elected by the emirs and 20 by citizens who have the right to vote (about 12 per cent of the total population). Abu Dhabi, which has around 600,000 inhabitants (more or less as much as Palermo) is the federal capital. The official religion is Islam and freedom of worship is limited.

The enormous economic progress of this country has not gone hand in hand with the social and political one: even if among the Arab countries the United Arab Emirates are considered one of the most liberal, in some aspects of social life there is a strict interpretation of the sharia, the death penalty is still in place and some limited reforms in recent years have been made mainly for economic reasons (to attract more foreign workers, who are a key part of the workforce in the UAE). According to Amnesty International, human rights violations in the Emirates are still widespread, and include arbitrary detentions and repression of women’s rights and expression.

Oil was found in the area in the 1960s, and it radically and rapidly changed the condition of the future United Arab Emirates. Before the discovery of oil, the seven emirates were poor countries and divided by tribal conflicts. There was a suspicion that the area was rich in oil, but it took a while to start exploring. The first was made by the well-known French explorer and director Jacques Cousteau.

Das Island, an Emirati island that had always been arid, lonely and inhabited only by birds, scorpions and turtles, became for example the oil industry outpost it is today, on which around 6,000 workers alternate at a time and which appears as a tangle of pipes, siphons and containers. Exports soon began, and in 1971, the year in which the United Arab Emirates declared its independence, the Abu Dhabi National Oil Company, the still active state oil company, was founded.

– Read also: The Camorra who live in Dubai

The enrichment was enormous and the growth of the national economy very fast: today all this is reflected in the impressive urban and architectural development of cities like Dubai, where the tallest skyscraper in the world is located (828 meters, about two and a half times the Eiffel tower, and 163 floors), artificial beaches and various futuristic projects.

Perhaps the most interesting aspect of the UAE is its foreign policy. Especially in the last decade, the Emirati government has become more and more interventionist, to the point of assuming a great influence throughout the region. But this influence has very often been used to preserve the status quo in the region and favor the Emirati friendly forces, even if it has meant supporting authoritarian regimes and arming notorious dictators.

Always an ally of the United States, the UAE presents itself as a bastion of stability in the Middle East, but it is actually a small and powerful heavily armed nation – which former US Defense Secretary James Mattis called “little Sparta. ”- which, according to various opinions, has on several occasions contributed to fostering violence and repression in different contexts, in order to maintain the status quo and not damage their interests and their enormous wealth.

– Read also: The most powerful Arab leader you haven’t heard of

The UAE promoted the rise of authoritarian leaders, hindering the democratic transition of the countries that sought it. It happened in Egypt, where the Emirates supported the 2013 coup that led to the deposition ofPresident Mohamed Morsi – democratically elected after the fall of Hosni Mubarak, who had ruled Egypt for thirty years in an authoritarian way – and the installation of the regime of Abdel Fattah al Sisi.

The United Arab Emirates in recent times has approached the Syrian regime of Bashar al Assad, while in the civil war in Libya they have supported Marshal Khalifa Haftar, one of the most powerful men in the country, head of militias linked to the government of eastern Libya and against the government wanted by the UN: the United Arab Emirates supplied it with weapons, violating international embargoes, to hinder Turkey’s influence in the area.

More recently, after the Taliban conquest of Afghanistan, the Emirates have been one of the world powers most open to the new regime, with which they have maintained a continuous channel of communication – which in many respects has been useful to the countries. Westerners, who used the Emiratis as a diplomat.

Emirati foreign policy, analysts Daniel Wagner and Giorgio Cafiero wrote, is essentially driven by the desire to preserve the status quo for one’s own benefit.

Relations with the United States, which had deteriorated during the presidency of Barack Obama, improved after the election of Donald Trump, who in August 2020 favored the normalization, i.e. the beginning of diplomatic relations, of relations between the United Arab Emirates and Israel.

The United Arab Emirates thus became the third Arab country, after Egypt and Jordan, to recognize Israel. It was an advantage for the United Arab Emirates, which began to benefit from the collaboration with Israel, rich and advanced in terms of economics, technology and security, and which for some time have been trying to present itself in the eyes of the West as an indispensable country to solve the Middle Eastern crises and more tolerant than other Arab Gulf states, despite the authoritarianism of his regime.

– Read also: The agreement between Israel and the United Arab Emirates, explained well